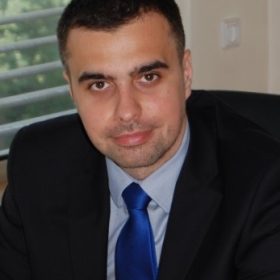 He was graduated as a Mining Engineer (2003) from AGH University of Science and Technology in Cracow (AGH-UST). He got MSc Engineer in Geomechanics. After graduation, he started working for IMG PAN (2003 up today). In 2008, he defended a double PhD degree: one in the field of Mining & Geological Engineering at AGH-UST, the other one in the field of Soil Mechanics at TU Bergakademie Freiberg (Germany). In 2016, he defends his habilitation (postdoctoral degree) in a field of Mining & Geological Engineering at Central Mining Institute (GIG) in Poland. In 2009 he has become the youngest member of the Polish Committee on the State Mining Authority for the state of water and rock roof collapse hazard in Salt Mine "Wieliczka" S.A., and since 2010 he has been a full member of the Polish Commission of the State Mining Authority for the Surface Protection. In 2011-2014 he was working at the AGH-UST, Faculty of Drilling, Oil and Gas.

Professor Tajduś is the author and co-author of more than 80 publications where about quarter of it was published in the International Journal with IF (in a field of Rock Mechanics, Soil Mechanics, Mining). He has been working in more than 100 industry projects in whole Europe related to Mining-inducted Rock Mass Deformation, Mining Damages, Rock Mass Stabilization, Rockburst, Tunneling, Hydraulic Fracturing, CBM and almost 30 national and international research projects. Professor Tajduś was a reviewer of 9 doctoral and postdoctoral degree theses and almost 40 Scientific International Journal publications. He is co-organizer of conference Altbergbau-Kolloquium (involving the problem of old mining) and Knothe Conference (involving the problem of Mining-inducted Rock Mass Deformation).

He is currently the member of: Council of Strata Mechanics Research Institute Polish Academy of Sciences, International Society for Rock Mechanics (ISRM), International Society for Soil Mechanics and Foundation Engineering, and the assessor in State Mining Authority in fields of: bolt anchoring rock support, shaft lining, rock burst, assessment in the new excavation’s systems. Since 2018 he become the Section Editor (in a field of Rock Mechanics) in Archives of Mining Sciences Journal (with IF).