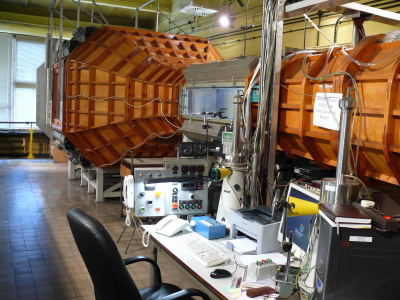 The basic equipment used for calibrating anemometers, i.e. devices for measuring wind speed, is an open circuit aerodynamic tunnel. The tunnel serves primarily to calibrate and check both handheld and stationary anemometers, such as:

The open circuit aerodynamic tunnel was designed and constructed by specialists from the Faculty of Power and Aeronautical Engineering of the Warsaw University of Technology, according to the guidelines provided by the Strata Mechanics Research Institute, Polish Academy of Sciences. The construction process was started in 1968 and completed in 1971. The air flow is generated by a blade ventilator equipped with a DC motor, and a thyristor system which regulates rotation. The ventilator's rotational speed is steady for the whole range of the air flow speed. The maximum power of the motive system is 13 kW. The ventilator within the tunnel is additionally equipped with a spare thyristor drive.

The speed of the air flow in the measurement chamber of the tunnel is measured in an indirect way, by means of a multi-hole trim and a Pitot-static tube. The differential pressure on the tube and the measurement trim is established with Betz-type projection manometers with the range of (0 ÷ 39.3) mbar and the definition of 0.01 mbar. The manometers have a certificate of calibration issued by an accredited laboratory or the National Metrology Institute.

The current density of air is established with an electronic barometer of the μBAR type and the Assman psychrometer. The tunnel is placed within an air-conditioned room where the air temperature is stabilized.

Aerodynamic properties related to calibrating anemometers are established by means of a computer system, which generates a certificate of calibration for an anemometer of a given type. The system can operate "online" with the anemometers that have been equipped with an outlet with an electrical measurement signal.