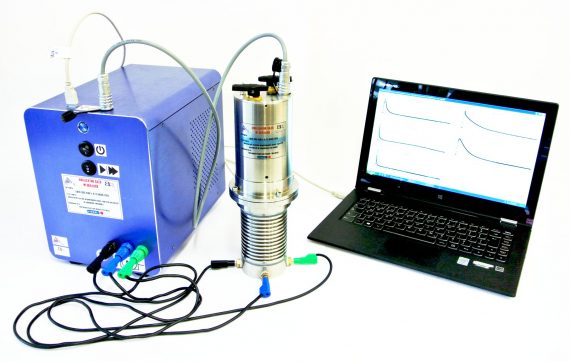 The constructed instrument for balancing gas contained in rocks, called the GPR analyzer, consists of two basic functional blocks: a mill for comminuting rocks and an analyzer equipped with appropriate sensors: of gas concentration, of pressure, and of temperature.

A rock sample is placed inside a hermetic measuring chamber of the instrument, where it is comminuted by means of a rotating knife. The knife is propelled by a high-speed brushless electric motor, whose power is 2.2 kW. The maximum rotational speed of the knife is 21 000 rpm. Such power of the motor and such rotational speed of the knife make it possible to comminute a sample of a cupriferous rock weighing 30-50 g to grains of a size expressed in single micrometers, in less than a minute.

The upper lid of the measuring chamber of the instrument is equipped with the sensors of gases, pressure, and temperature. In the lid, a reference chamber has also been installed, in relation to which changes in the pressure and concentration of gases released from the sample into the measuring chamber during the measurement procedure are assessed. The amount of gas contained in the pore space of the rocks is balanced on the basis of the change in the pressure of gas in the measuring chamber, which is a result of comminuting the rock sample and releasing the gas included in it. On the basis of the concentration changes, the share of particular components of the mixture of gases released from the sample is determined.

The type of gas sensors used and their measuring range can be adapted to the needs of the user. The measurement data is controlled and recorded using dedicated software. 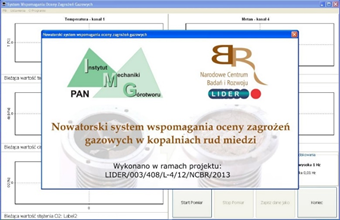 The construction of the GPR analyzer was financed from the resources of the National Centre for Research and Development in Poland, as part of the project entitled "An innovative support system for gas hazard evaluation in copper ore mine" (Project no.: LIDER/003/408/L-4/12/NCBR/2013).